Glow Cone for the Demogrid UV and White Light LED Flashlight. Glow Cone ONLY – UV light is not included.

The Glow Cone is custom designed to attach to the DemoGrid Blacklight Ultraviolet (UV) and White Light LED Flashlight. The Glow Cone is an optional attachment for the duel function UV flashlight.

NOTE: This is ONLY the Glow Cone. The UV light is not included.

A Glow Cone is an optional attachment for the UV flashlight. Though there may be other applications, the Glow Cone was designed for use while playing glow disc golf. The UV light bar can energize a glow disc in as little as 3 seconds. When energizing a glow disc, the Glow Cone will block light that is reflecting off of the disc so that the reflecting light does not effect your night time, darkness adjusted vision. 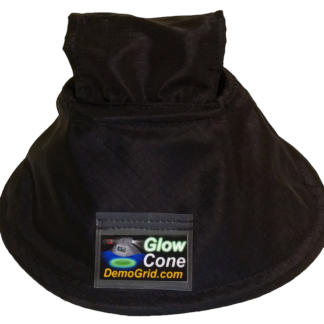